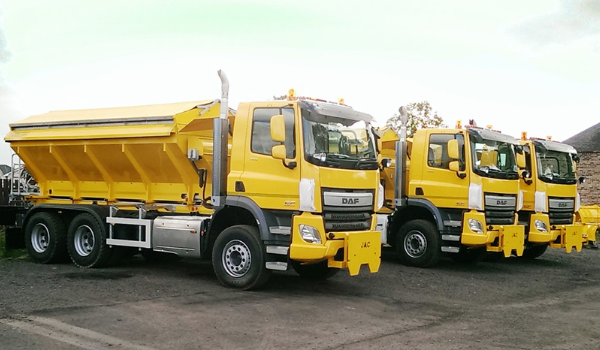 ULEMCo, the company pioneering the adoption of ultra-low emission hydrogen fuel in the UK, has commenced the largest single deployment of hydrogen dual fuel vehicles yet seen. This follows an order secured with Scottish company James A Cuthbertson Ltd, to transform Glasgow City Council’s existing fleet and some new gritters to be hydrogen enabled. Thanks to Scottish Government funding through Transport Scotland, the work will see 20 gritter / multi-purpose vehicles ready for use on the streets by next winter, providing a significant opportunity for a reduction in CO2 emissions.

Around half of the fleet of 20 vehicles will be converted to hydrogen dual fuel, while the rest will be hydrogen enabled from the start. Based on the gritters’ normal duty cycles, around a third of the energy is expected to come from hydrogen, resulting in the same proportion of emissions being saved. The City Council is in the process of securing ‘green hydrogen’ for the fleet to refuel. It is also expected that other air quality emissions like NOx will be greatly reduced compared with the base vehicle; ULEMCo’s H2ICED® technology ensures that hydrogen is used in the fuel mix when it can burn most efficiently, and with benefits to tailpipe emissions.

ULEMCo has found a ready market for its hydrogen dual fuel conversions in heavy duty ‘back to base’ utility vehicles, where the practicality and cleaner performance are readily apparent. This is the first set of conversions for gritter lorries and is the company’s largest volume order to date. Deploying fleets of hydrogen vehicles in this way builds the base load for hydrogen infrastructure investment, as well as saving large volumes of CO2. It helps to create a market for hydrogen fuel that will make it easier for other local authorities and businesses to switch to the cleaner fuel.

ULEMCo expects to deliver the vehicles in the coming months, where they will contribute immediately to cleaner air in the city.

“We see this development as part of a wider roll-out of hydrogen fuelled fleets across the country, and are really pleased that our first such order is with a local authority so close to our factory in Biggar. Our long history and experience of designing and manufacturing specialist highway vehicle bodywork combines well with ULEMCo’s specialist expertise in deploying hydrogen fuel systems – creating a completely UK-manufactured solution.”

“The environmental impact of large diesel powered utility vehicles is very high in city centres . We are delighted to support Glasgow City Council in its ambition to become Britain’s first zero net carbon city, and help to ensure that its entire fleet of 2000 vehicles is carbon free by the end of the decade.”