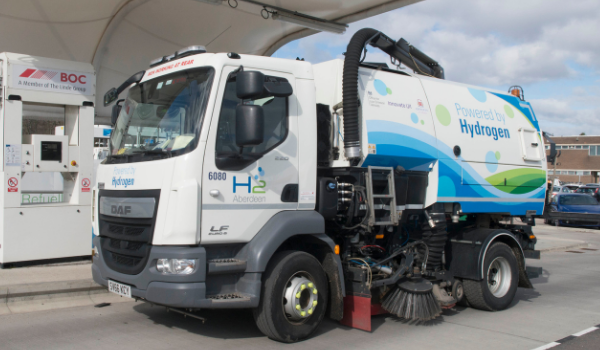 Over 14 tonnes of CO2 was saved in a two year trial involving just 11 urban trucks and vans running on green hydrogen dual fuel. That is one result of the Low Emission Freight and Logistics Trial (LEFT) project to investigate the practical deployment of hydrogen powered vehicles in the UK.

With between 20-45% of the diesel fuel being displaced by green hydrogen on the various vehicles, the HyTIME project concluded that with the appropriate hydrogen infrastructure, fleet wide roll-out could provide a huge and timely step change in overall fleet emissions.

In the trial, ULEMCo – the company pioneering the adoption of ultra-low emission hydrogen fuel with its partners – converted four refuse trucks, a road sweeper, a patient transport vehicle, four panel vans and a refrigerated van to run on hydrogen as a dual fuel. During the trial period, nearly 60,000 km were covered and 1619 kgs of hydrogen used. One of the partners working with ULEMCo on the HyTIME project was Aberdeen City Council, which took delivery of the world’s first hydrogen dual fuel road sweeper, as well as two Merc Econic refuse trucks, and has gone on to put several more of these on the roads since.

The demonstrated benefits would have been even more dramatic had the hydrogen infrastructure been more developed. Project data show that the CO2 saving would have been about 45 tonnes per annum across the 11 vehicles. When the vehicles were not using hydrogen in their day to day operations – from waste collection to patient transport and van deliveries etc – the principal reason was the lack of available refuelling facilities.

Other conclusions from the work were that tail pipe emissions in a number of specific applications such as refuse trucks were significantly better than the EURO 6 base vehicles, with the NOx emissions reduced by between 29-85% across the range of cycles tested. If deployed full time, the vehicles would not only save carbon but also provide improvements to local air quality. At least 96% of the hydrogen used in the trial came from on-site electrolysis from renewable electricity.

The drivers and operators confirmed that, from an operational point of view, the vehicles ‘fitted well with their daily operation’, but said that reliability of the hydrogen infrastructure and fuel availability needed to be improved to get the most from the technology.

Amanda Lyne, Managing Director of ULEMCo agreed: “The LEFT trial was an excellent opportunity for us to show the diverse range of commercial vehicles that can be hydrogen enabled. This provides a route to reducing GHG emissions significantly across fleets of heavy use and heavy duty vehicles without requiring the operators to make major changes to their usual operations. A number of the partners including Aberdeen City Council are continuing to use the vehicles at locations where the hydrogen infrastructure is more reliable. All partners agreed that if this was available for them too, they would have continued to do the same.”

The HyTIME project has shown that the opportunity for hydrogen dual fuel technology is available now, with no real limitation on the numbers of vehicles that could be converted. ULEMCo and its partners believe that hydrogen technology should be seen as a key part of the UK’s energy strategy and post COVID -19 recovery plans. The company is seeing latent demand across a number of fleet customers that would help build the base loads and the commercial case for faster development of the fuelling infrastructure.

The LEFT work was partly funded by the Office for Low Emission Vehicles (OLEV) in partnership with Innovate UK, and included independent testing of the overall emissions of a number of the vehicles in the project.

This website uses cookies to improve your experience while you navigate through the website. Out of these, the cookies that are categorized as necessary are stored on your browser as they are essential for the working of basic functionalities of the website. We also use third-party cookies that help us analyze and understand how you use this website. These cookies will be stored in your browser only with your consent. You also have the option to opt-out of these cookies. But opting out of some of these cookies may affect your browsing experience.
Necessary Always Enabled

Performance cookies are used to understand and analyze the key performance indexes of the website which helps in delivering a better user experience for the visitors.

Analytical cookies are used to understand how visitors interact with the website. These cookies help provide information on metrics the number of visitors, bounce rate, traffic source, etc.

Advertisement cookies are used to provide visitors with relevant ads and marketing campaigns. These cookies track visitors across websites and collect information to provide customized ads.

Other uncategorized cookies are those that are being analyzed and have not been classified into a category as yet.

SAVE & ACCEPT
Scroll to Top