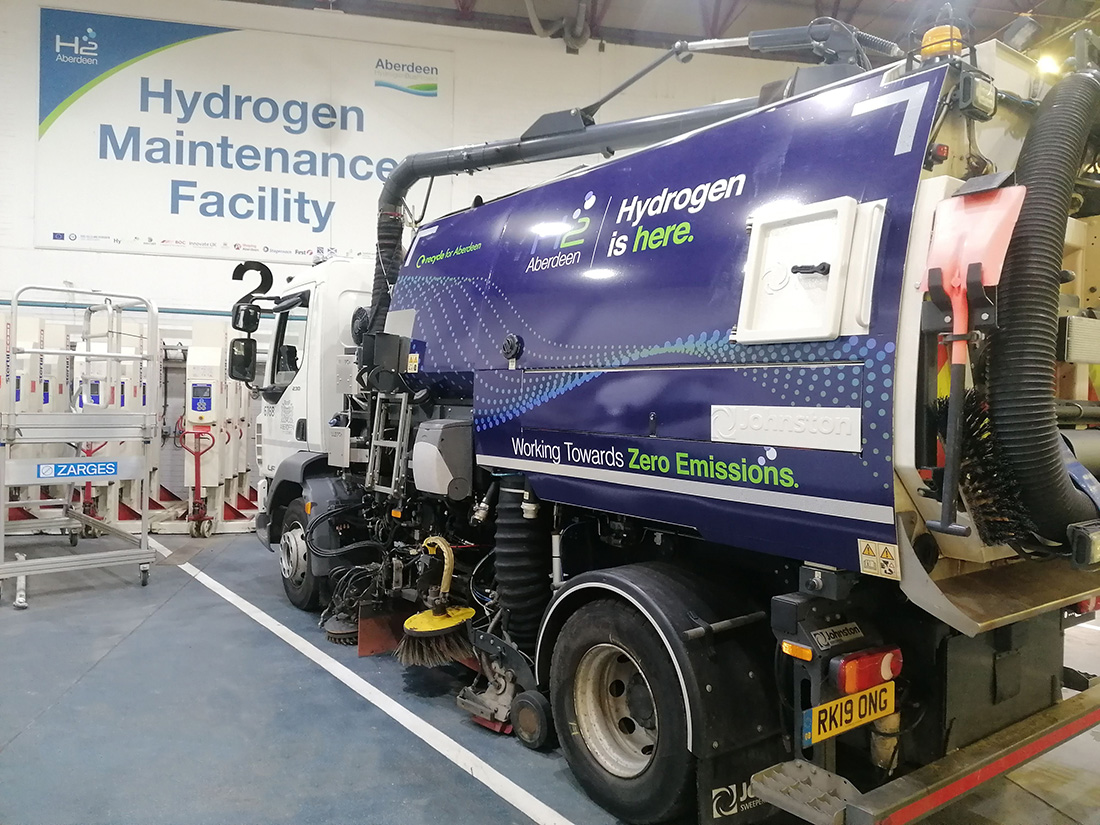 ULEMCo has demonstrated impressive real-world reductions in CO2 emissions through the deployment of road sweepers for Aberdeen City Council.

Applied to the whole fleet of sweepers, this would lead to almost 30 tonnes of CO2 being eliminated from the operation, contributing to cleaner air for the city, and taking another significant step towards net zero.

The optimised sweeper with hydrogen dual-fuel operation for both the powertrain and the “donkey” engine was announced in 2020, and has shown daily diesel displacement rates nearing 50% – believed to be a record for the technology. Since the start of this year, the vehicle has been running on the streets of Aberdeen, saving the annual equivalent of approximately 3 tonnes of CO2 emissions.

The sweeper has been converted by ULEMCo to run on dual-fuel, which allows a controlled quantity of hydrogen to be burned directly in the engine in combination with the diesel. This leads to exhaust emission reductions that relate directly to the proportion of the displaced diesel – typically between 20-40% depending on the duty cycle. However, in this case, the duty cycle, engine types and operation are delivering as much as 50% of the energy from hydrogen. In a year, each sweeper would use 700kg of hydrogen, so the nine-strong fleet would use 6.3 tonnes of hydrogen with the kind of regular supplies the Council is accessing at the Aberdeen Hydrogen hub. 30 tonnes of CO2 is sufficient to offset the carbon foot print of three people for a year in the UK. Extrapolating that to all of the 333 UK councils would suggest that a saving of 10,000 tonnes is possible if an average of just ten vehicles were converted at each.

ULEMCo believes that this application – and others like it such as refuse collection vehicles, gritters and other specialist equipment – are ideally suited to the use of hydrogen today. Their duty cycles take them back to base daily, enabling consolidation of scaled demand for hydrogen and the related refuelling infrastructure. This provides the base load for the development of competitive hydrogen supplies, and cracks the ‘chicken and the egg’ conundrum dissuading some operators from making the transition to alternative fuels.

With a fleet of over a hundred utility vehicles now converted by ULEMCo and working in real-world environments across the UK, this is arguably the most innovative yet practical approach to decarbonising the cleaning of Britain’s roads.

I would say to local authorities that are thinking about moving to hydrogen technology, that it not only helps you with the economic targets that you may have, but it will certainly help with the environmental targets that each and every local authority in Scotland has set themselves.

Given the need to start acting on climate change right away, it’s a case of the best being the enemy of the good. A lot of attention and public funding support is focussed on looking for zero-emission solutions, but we cannot afford to wait for these to be commercially available, we must start transitioning to carbon-free energy using the full toolkit to achieve CO2 reduction immediately.