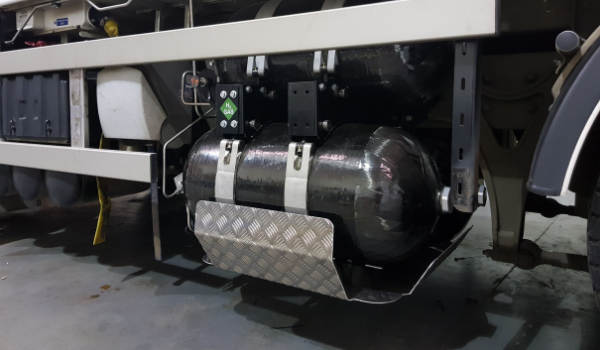 Electric vehicles are viewed by many as the solution to a lot of transport-related problems but other technologies such as hydrogen are fighting back.

As truck manufacturers continue to tease their upcoming electric trucks, it’s easy to forget other alternatives to diesel are available. Yes, the industry is on a path to net zero and a commitment to reducing carbon emissions, but battery-powered transportation is not the only way to get there.

Certainly in the case of long-haul trucks there are issues over the size, weight and amount of batteries required. Add in concerns over charging network infrastructure, recharging times and overall performance and reliability and it is clear to see that, in some cases, electric trucks might not be the right way to go.

However, no-one is naive enough to think that pure diesel power is anything more than a mid-term solution. A variation on the theme – a dual-fuel configuration – has got the industry thinking and talking about hydrogen.

She says: “Hydrogen as a fuel will allow people to have zero tailpipe emissions without changing their duty cycle and behaviour. Quite simply, we need to crack on and not just talk about it.”

Lyne maintains that hydrogen is as close to conventional technology, in terms of operational use, as possible. Electric vehicles are feasible for certain things but, she argues, they aren’t going to be suitable for everything and will also require a lot of changes to duty cycles.

The ULEMCo solution is relatively straightforward. The only major changes, says Lyne, over an existing set-up is to add some form of hydrogen storage and integrate gas injectors into the engine.

“Our aim is to offer decarbonisation,” she explains. “We recognise that Euro VI technology [and it doesn’t work with older tech] is primarily about air quality emissions, so by using hydrogen instead you are helping decarbonisation.

“As far as our technology is concerned, we calibrate the engine and map our hydrogen to ensure the vehicle works exactly the same [as a diesel],” continues Lyne. “We do that to make sure the driver doesn’t notice any difference, and also to at least equal the NOx level of diesel – or even improve it. We inject hydrogen at the times when all of those factors come together. So we will use more hydrogen in a vehicle that’s operating at low speed and low torque than we would do than if it was running flat out on the motorway.

“That’s why refuse trucks work very well, because there’s a great engine to move the heavy weight, but when it’s moving it’s not really doing a lot, so then we can use more hydrogen.”

The story so far

In total, Lyne says ULEMCo has demonstrated its technology on around 100 vehicles. They range from some that have been on the road for five years and subsequently been decommissioned and sold on to new fleets that are dipping a toe in the ‘hydrogen’ water. And the company’s reach extends overseas, to the Continent and Canada.

There have already been commitments to ULEMCo’s system from city councils in Scotland. Glasgow is currently converting a fleet of 20 gritters; half of the vehicles were already on the fleet and the others were acquired as part of the replacement programme.

In Aberdeen, a road sweeper has been converted to run on hydrogen. “The core technology is used day-in and day-out all over,” explains Lyne. “The fleet decarbonisation strategy for Aberdeen is that all of its HGVs will have hydrogen; that’s where we see the future.”

All about the money

Lyne says the running costs of a dual fuel hydrogen application, compared with a pure diesel-fed vehicle, are difficult to predict due to the cost of the fuel itself. “At the moment, while there is limited hydrogen supply – and given there is no hydrogen infrastructure – we face a challenge,” she admits. “We recognise it is a good option and makes decarbonisation possible, but we need more production, distribution and ‘at the pump’ facilities.

“There are examples of it working – I’m aware that in some cases, if you use hydrogen across the fleet with enough volume, you can acquire hydrogen at prices that are cheaper than diesel,” she adds. “But that requires an understanding of scale and the conversion of a whole fleet.”

Once operators have that understanding, however, many are keen to take advantage of the savings. “If you want to go electric, you can do it with one vehicle if it’s available – which, in most cases, it isn’t. But if you look across the fleet and you’ve got 30 vehicles operating on one location and they’re all Euro VI diesel, you can save between 20% and 40% of your carbon emissions if you convert them all to hydrogen,” says Lyne. “That’s how we make a big difference with the whole process. For Glasgow, the hydrogen will be used for buses as well as gritters, so it’s likely that the costs will come down to on par with – or even lower than – current diesel costs.

As operators look for ways to make efficiency savings and reduce outgoings, solutions such as ULEMCo’s are appealing. Converting a vehicle to dual fuel costs in the region of 20-30% of its sticker price, estimates Lyne. “But an electric vehicle is twice the cost of an existing system and a fuel cell system would be four times the cost,” she reasons.

Another positive for Lyne and her team is that there are few concerns about hydrogen from a safety point of view. “People understand that all fuels have a risk,” she says. “All the systems we install – and the industry installs – means that the tanks are safe and have been crash- and bullet-tested.

“It’s an unavoidable question because it has a different risk profile but, given what we’re trying to do, we have to think differently than liquid fuels, which aren’t entirely safe either. We’re working on a project with an airport that had to ensure the whole safety team were happy to have hydrogen air-side. The more we use hydrogen, the more we will have to deal with those situations. But if you choose electric vehicles and one catches fire, people will still point the finger.”

The solutions that ULEMCo offers depend on the type of operation. For a ‘back-to-base’ duty cycle, some customers are happy to refuel on a daily basis, enabling 20-40% of the energy consumed to come from hydrogen. “The refuse trucks we do for Aberdeen probably use about 5kg a day, based on a 30% energy displacement,” confirms Lyne. “It’s all about the space onboard – there’s limited space and we do have to find space on the chassis,” she explains. “If it’s a long-wheelbase Mercedes-Benz Econic, for example, we’d put 10kg so they could fill up every other day – and the customer will pay for that.”

The solutions that ULEMCo offers depend on the type of operation. For a ‘back-to-base’ duty cycle, some customers are happy to refuel on a daily basis, enabling 20-40% of the energy consumed to come from hydrogen. “The refuse trucks we do for Aberdeen probably use about 5kg a day, based on a 30% energy displacement,” confirms Lyne. “It’s all about the space onboard – there’s limited space and we do have to find space on the chassis,” she explains. “If it’s a long-wheelbase Mercedes-Benz Econic, for example, we’d put 10kg so they could fill up every other day – and the customer will pay for that.”